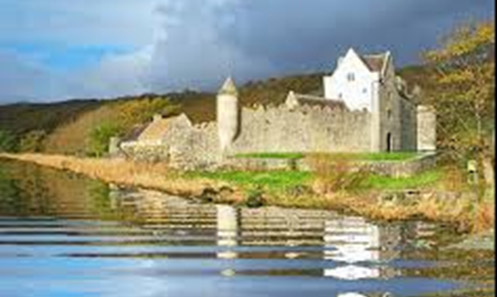 Francisco de Cuellar was a sea captain who sailed with the Spanish Armada in 1588. After being ship-wrecked on the coast of Ireland he was given refuge at O'Rourke's Castle. De Cuellar eventually returned to Spain and wrote about O'Rourke's hospitality. In 1590 the English heard of this and sent forces to destroy the tower house, O'Rourke fled but was eventually captured tried for treason and executed in 1591. In 1628 the 15th century tower house built here by O'Rourke was demolished down to it's foundation by English settler Captain Robert Parke, he used the stones to build a fortified 3-storey manor house on the eastern side of the bawn.

The Plantation castle forms the eastern side of the defensive walls that were once surrounded by a moat - a portion of which is still visible. The castle has been carefully restored by the OPW to include window glazing and a mortise and tenon Irish oak roof using techniques and craftsmanship of the 17th Century.