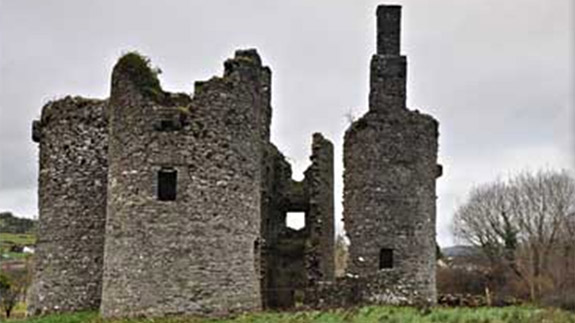 Ballinafad Castle was built in 1590 and is also known as the ‘Castle of the Curlews’. It has had a turbulent history due to its strategic location that controlled the Red Earl’s Road through the Curlew Mountains.

It was built during the nine years war (1592-1601) by Captain John St Barbe on land granted to him by King James I.

It was modeled in a similar style to a 13th century Norman castle with a central 3 story block dwarfed by four massive corner towers.

It was later attacked by the Burkes and local Irish forces in 1642, retaken by Cromwell in 1651, was later used for the chancery inquisitions after the restoration of Charles I for the Sligo area but finally fell into disuse in 1680. it is now a national monument and under the care of the Office of Public Works.