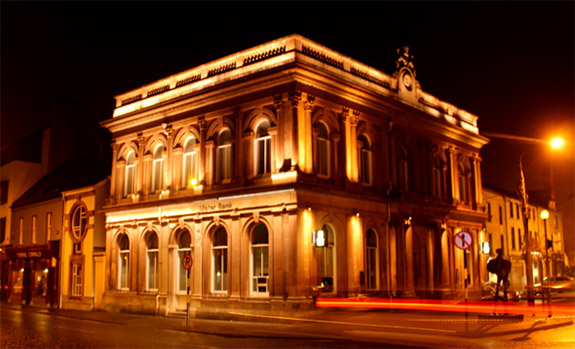 The Ulster Bank (co-ordinates 54.27250 -8.47400) is a fine detached five-bay two-storey sandstone ashlar classically-styled bank, was designed by James Hamilton architects of Belfast and Glasgow and was built in 1863.

One of the more notable features of this building, which occupies its commanding position at this busy junction in Stephen Street is its rich ashlar Scottish sandstone.

The appearance of the building is enlivened by the high quality stone masonry which has decorative artistic detailing. The bank is significant, attesting to the prosperity of Sligo town in the late nineteenth century.

The Ulster Bank building was 'bombed to ruins' during the Irish Civil War but was rebuilt soon after.

In front of the Ulster Bank stands Sligo's most popular, and most photographed tourist attraction. A statue depicting the world-renowned poet William Butler Yeats 'wrapt in his words'.